Posted on June 11, 2013 by projectlighttolife 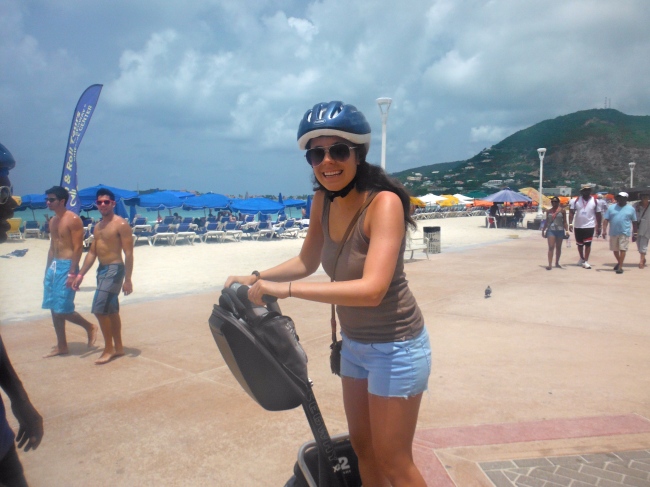 A shot my mom got of me before taking off for my Segway tour!

Our tour guide offering instructions on how to use the Segway. 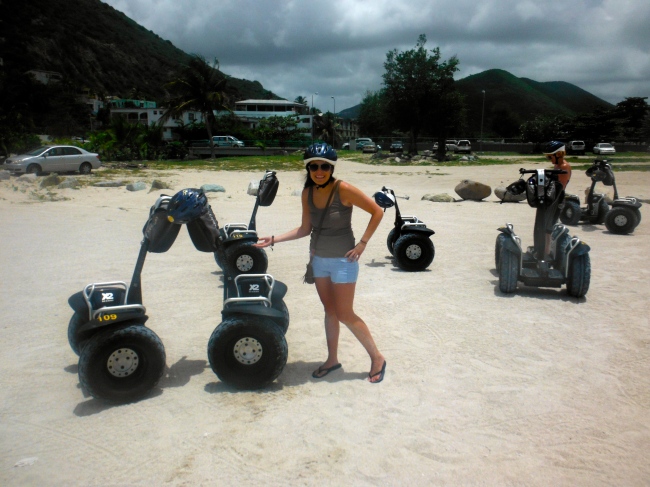 Our break at the beach, surrounded by Segways! 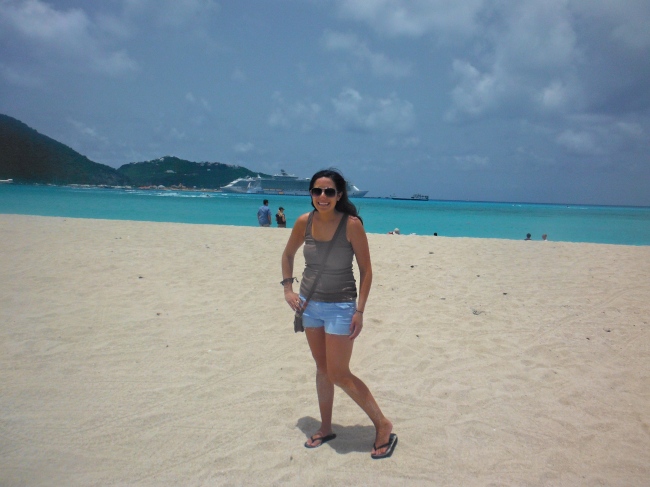 A photo the tour guide offered to take (notice the sand covering my legs in this one and the photo above, post-fall!)

The tour guide, who told me not to be shy when I simply stood next to him at first, and I!

Not only can I say I finally got the chance to ride a Segway scooter for the first time as of this week, but I can also say that I officially stopped an entire Segway tour group for a few minutes. My scooter happened to go over a rock in the sand, causing the scooter to fly out from under me and me to fly forward into the air. Paul Blart wannabe much? (If you haven’t seen “Mall Cop,” check out some clips on YouTube as the film truly captures the Segway spirit; I may be a bit biased as a major Kevin James fan though!) I guess I should start my Segway story from the beginning:

Last night, I just returned from a ten-day trip to St. Martin with my family. At least once in the week when we travel to St. Martin, we go to the town of Philipsburg, the capitol of Dutch St. Martin, and a wonderful market town. I always see people riding Segways in this area and I remember last year my mom and I went to inquire what the price was to ride one. After they told us it was $60 for a half hour, I told her I could skip the Segway, as we’d already done some souvenir shopping and other fun activities earlier in the week.

But this year, I was determined to ride a Segway; after all, now that it’s in writing on my bucket list and blog, I just had to do it! I told myself I would use the generous amount of prize money I won in a poetry contest this year to pay for this bucket list activity and maybe a couple others, since my parents already paid for more than enough (nearly everything else!)

Just as my mom and I were looking for the place they rented out the Segways, we noticed a giant Segway tour on the street; if you have never seen a Segway tour riding by, I’d definitely recommend it because it’s hilarious. Luckily, they were still stopped, so we asked them where we could rent the Segways; luckily, they happened to be right in front of the store and asked if we wanted to join the tour. My mom was still torn on whether she wanted to do it or not, but when she went in they said there was only one left for this tour unless we wanted to wait for the next one; she said it was a sign she could probably sit this one out, do a little more shopping, and come back to meet me.

This time, the price was only $30 for a half hour tour, which I thought was so worth it! It may have been cheaper because I went with the group (most of whom came from a big cruise ship that was only on the island for the day, but it was so much more fun anyway than doing it alone) or maybe we had gone to a different place.

The Segway tour was so much fun, especially while riding around beautiful St. Martin. Basically, we had to lean forward to make it go and backward to brake. The instructor took a minute to ensure I could maneuver the scooter and after he felt confident, the whole group took off.

We cruised up and down the street by the stores, around some cones they had set up on the beach, then back onto the streets, and the beach again. As I mentioned, at one point, my Segway went over a bump in the sand, started zigzagging out of control, flew out from under me, and I am not exaggerating when I say I flew in the air; luckily, I had my hands out in front of me and the sand was so soft my knee barely even got a scrape.

What made it even better was the hilarious man who lives in St. Martin and was sitting on the beach. He ran over to me and said, “Woah! That was awesome! I used to work there and I’ve never seen somebody fly off like that!” He then proceeded to give me a high five.

I apologized to the tour group about ten times and proceeded to keep laughing, because at that point I still assumed I had done something wrong (in some of my previous posts I discuss my lack of motor skill when it comes to things like dancing, wood shop class, etc). They were all so sweet, including the super nice tour guide who told me it wasn’t my fault; I had went over a rock. He just needed to take a minute to reset the scooter.

A super nice mom I met from Ireland, who later asked me to take photos of her to prove to her sons back home she had actually rode a Segway, told me her heart stopped when she saw me fly off, and a nice couple from South Carolina kept asking if I was okay. Later, a boy about my age said no one noticed, but the same thing happened to him and he had just caught up with our tour group; it made me feel a little better, especially since he was okay!

After the two-minute rest, we continued to the beach, where we got a chance to take a break and take photos by the water. It was so much fun helping the mom from Ireland or several couples take photos and they, along with the tour guide were so sweet, asking if I wanted them to take pictures of me. Toward the end of the tour, the guide momentarily stopped our group to hand out handmade bracelets (nearly each one was different) to everyone who went on the tour, which I thought was adorable.

Even with that funny little aside to my first “Segway misadventure” as someone from home had called it, I would definitely do it again next year. It was a blast, something different to do, and in my opinion, the price was great!

So who else has ridden a Segway or been on a similar machine/tour group? Or does anyone have any other funny stories to share from similar experiences? I’d love to hear from you!

33 Responses to Ride a Segway Scooter