And What Do You Want to do with THAT?: The English Major

Posted on June 18, 2014 by projectlighttolife

Go English majors! Long live liberal arts! Below is the speech I gave, during the weekend of my college graduation, at my English convocation: 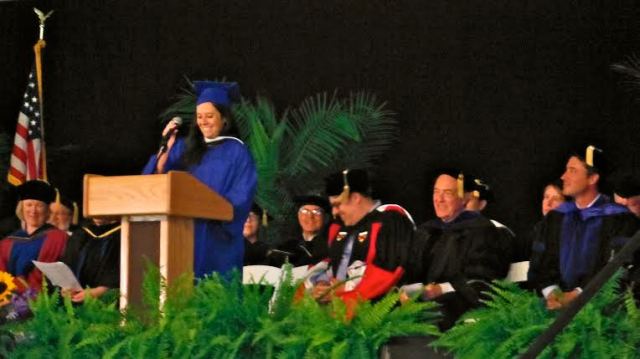 At the start of the movie Adventureland, there’s a scene in which James, the main character, has just graduated from college. Although he got into Columbia for graduate school, his parents tell him that if he wants to go to Columbia, he has to get a summer job. He starts calling various places to see if they’re interested in hiring him. The first employer he calls asks about his previous job experience and he responds, “I wrote for The Gordian Knot, it was a literary journal in college.” The employer tells him that he’ll have to get back to him.

“How lucky I am to have something that makes saying goodbye so hard” – A.A. Milne.

Eventually, James tells his parents he knows the only place he can get a job is with his friend at the local amusement park. His mother responds, “What, at Adventureland? You got a concussion on the teacup ride there when you were six,” while his dad tells him, “You can do better, kiddo.” James responds, “I majored in Comparative Literature and Renaissance Studies. Unless someone needs help restoring a fresco, I’m screwed.”

Posing with my boy Hugh Morris at Morris library.

In the end, everything works out for James, he winds up getting the girl he loves and goes to graduate school. Yet, like James, I think a lot of us can relate to the concern we evoke when we tell people for the first time what we chose to major in, in college.

We might think back to a Thanksgiving dinner or a time we ran into an old kindergarten teacher, when our relative or teacher asked us what we’re majoring in. And when we told them we chose to major in English, our relative or teacher might have nodded for a minute, and then asked the inevitable question: “Oh, an English major. And what do you plan on doing with that?”

We might have offered some self-deprecating response to show that we understood their concern, or given a more optimistic one, like that ideally, we hope to be the next J.K. Rolling.

Yet, now that we are about to get a degree in English, I think most of us can agree that there are a lot of benefits to majoring in English.

Posing with my cousin, the celebrity.

For one, Urban Dictionary defines the English major as “The thinking man’s major.”

An article put out by the University of South Carolina’s English department suggests that another benefit of our major is we can impress our significant others by being able to recite Shakespearean sonnets.

But on a more serious note, more and more employers are saying that they love hiring English majors. 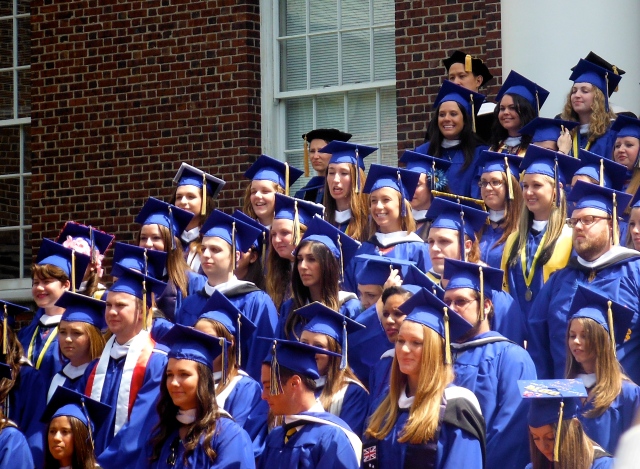 I found a great page put out by Villanova’s English Department that lists a series of articles, in which CEO’s discuss why they love hiring English majors.

Most of them suggest that all of the qualities they look for in the workplace are what we have studied over the past four years.

One employer says that a recent survey by Metlife found that 97% of business executives rate good writing skills as very important. 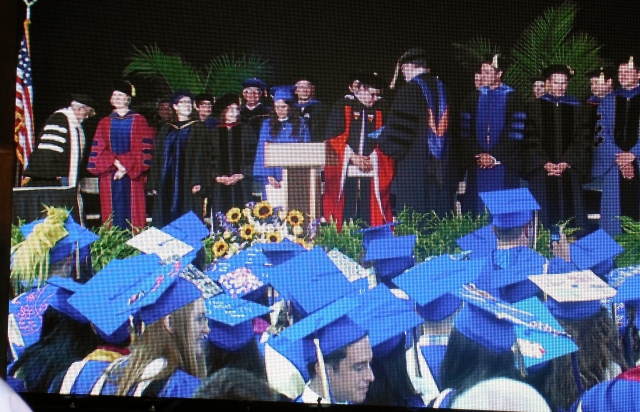 She adds that employers also look for people with good communication skills, the ability to think critically, do extensive research, and more recently, for people who are empathetic. A study done by the University of Toronto found that people who read fiction frequently have higher levels of cognitive empathy because readers are asked to enter into the characters’ situations and minds, which also improves their interpersonal understanding. Other CEO’s suggested that we are easy to work with.

One referred to us as an endangered species and said, “If you find one, you need to run over and catch him or her in a conversation.” 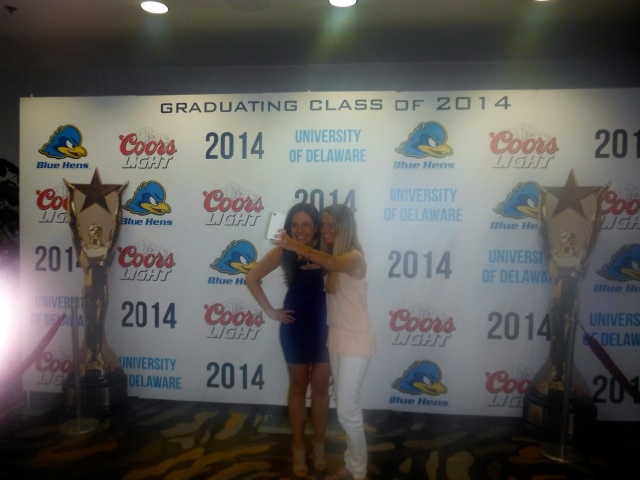 Chelsea, one of my best friends from back home, and I on the Red Carpet.

Another said, “I love English majors… I love their intellectual curiosity. And I love their bold choice for a major. Most of all, I love to hire them.”

Recently, I noticed that our own English department put up a poster that lists some successful people who majored in English in college, so I decided to look into it.

Among the list include the singer Sting, Conan O’Brien, Barbara Walters, Diane Sawyer, Steven Spielberg, not so surprisingly, Stephen King, Ken Jennings, the Jeopardy all time champion, and Vin Diesel.

Chair of the English Department John Ernest: “Let’s get this party started.”

One of my favorite quotes is by another famous person, John Lennon. Some of you might have heard this one. He said, “When I was 5 years old, my mother always told me that happiness was the key to life. When I went to school, they asked me what I wanted to be when I grew up. I wrote down ‘happy’. They told me I didn’t understand the assignment, and I told them they didn’t understand life.” 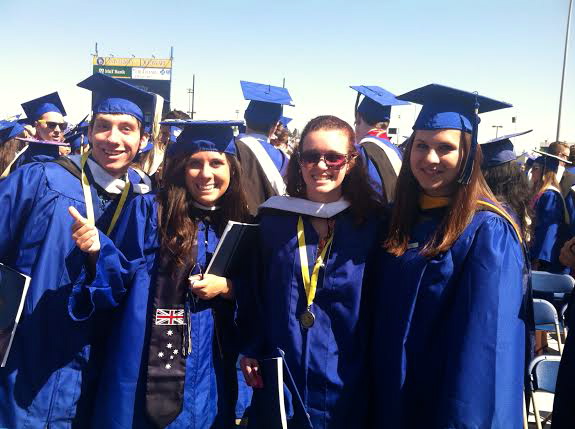 Studies have found that English majors tend to have high levels of job satisfaction. A study that surveyed alumni who had been English majors at California State University found a low unemployment rate and that they often used what they learned as English majors. 84 percent of the students said they were satisfied with the content of their work and the direction of their career, while 96.8 percent, said that given the chance to do it all again, they would major in English and recommend the English major to others.

Although I may be biased, I think many of us know there is something special about liberal arts, and especially, English classes.

I have always enjoyed hearing some of the comments friends in other majors make when we’ve talked about our day.

“Your professor came in wearing a pirate hat on Halloween and wears a Canterbury Tales tie? That’s awesome.”

or, “Your professor didn’t get angry when you explained the term ‘baller’ was originated by Shakespeare and brought in juggling balls for your group presentation?”

“You start off every class with a song?”

and one that I’ve heard a lot,

“You actually have conversations with your professors? Your classes seem so interactive.” 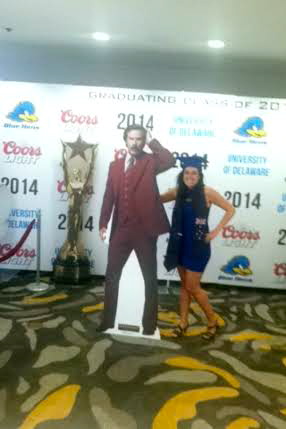 So glad Ron Burgundy showed up for the big day.

From our first class in Memorial 126 to E110, medieval literature, Shakespeare, creative writing classes, and more, I think it’s true that we’ve we taken some of the most exciting and interactive classes at UD. And like most college students, we perfected working under pressure, with the help of a lot of caffeine, as we continually told ourselves that we would never again start a paper assigned months ago, the night before it was due. 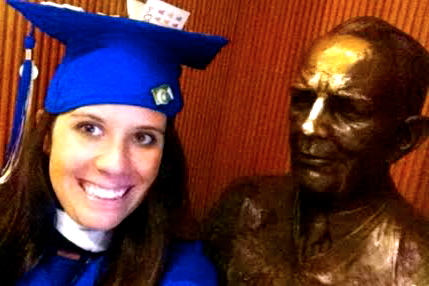 A selfie with Hugh.

About a year ago while writing a paper, I came across a term that has not yet made it to Webster, but is listed in something called the Dictionary of Obscure Sorrows. It’s become one of my favorite terms:

n. the realization that each random passerby is living a life as vivid and complex as your own—populated with their own ambitions, friends, routines, worries and inherited craziness—an epic story that continues invisibly around you like an anthill sprawling deep underground, with elaborate passageways to thousands of other lives that you’ll never know existed, in which you might appear only once, as an extra sipping coffee in the background, as a blur of traffic passing on the highway, as a lighted window at dusk. 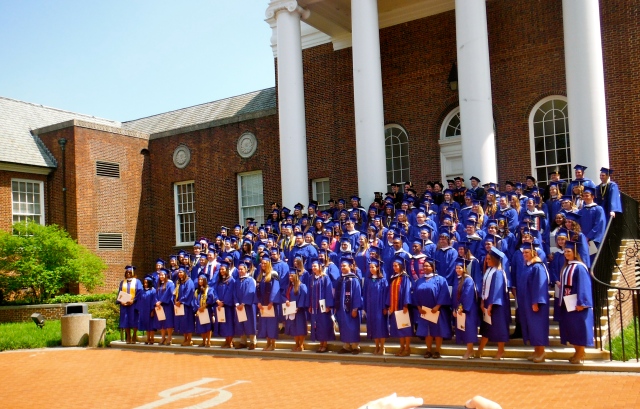 After today, many of us will eventually go on to new jobs or schools, and cities. Yet, I think we’re lucky to be able to say that our home in Memorial Hall, along with the people we met there, is now a large part of our epic story.

Posing with my family!

Before I conclude, I just want to thank my parents for always being so supportive of me and for helping me have such a great four years here. I want to thank my family and friends who came today, which really means a lot, along with Morris [the library]. I also want to thank all of my English professors, along with John Ernest, who helped make my experience at UD so great. And finally, thank you to my grandparents, who have always encouraged me, and my Grandpa J., who was one of my biggest supporters over the past four years, often volunteered to take me home for winter and summer breaks, despite joking that he didn’t know he needed to bring a u-Haul truck, and who also helped make my time here possible.

High school graduation with my grandpa, 2010.

Posing with my parents!

To conclude, I found a quote that I really enjoy by a professor, Mark Edmundson, who remarked, “The English major reads because, as rich as the one life he has may be, one life is not enough. He reads not to see the world through the eyes of other people but effectively to become other people. What is it like to be them at their best, at the top of their games?”

So like James in Adventureland, I think that everything is going to turn out okay for us. And the next time we’re asked what we’re going to do with our degree, we should go look at the person with confidence and reply, “Oh plenty. I’m an English major.”

59 Responses to And What Do You Want to do with THAT?: The English Major