Posted on August 31, 2014 by projectlighttolife

A few days ago, my mom called me to tell me that while going through boxes of old stuff I had written, she found a list I had written when I was eight years old: “100 Things to Do Before I Die.” I was thrilled she found this list for several reasons: I had not known I was interested in or even knew about bucket lists that long ago, I have now accomplished several items on that list (for example, go to France and go bungee jumping), and some of the items are hilarious. I know a few of the goals on this list are difficult to read, so before I photos of this ancient bucket list, I’ll list a few of my favorites:

12. Stay online for at least seven hours. (If only I could tell my eight-year-old self I would accomplish this one many times.)

16. Go to Prinston. (Sigh, to think that I became an English major.)

18. Make people in heaven be able to come back.

24. Get locked in an elevator. (I found this one really strange, especially since now, it is one of my biggest fears).

41. Give people Happy Easter cards on Christmas. (What a rebel!)

42. Join the army and quit. (I promise I no longer have such seditious thoughts).

50. Turn the school into a Care Bear factory.

59. Become a professional pencil sharpener. (I had such high aspirations as a child!)

Without further ado, here is the complete list. I know the title promises a list of “100 Things to Do Before I Die,” but my mom only found a list that goes up to 75. 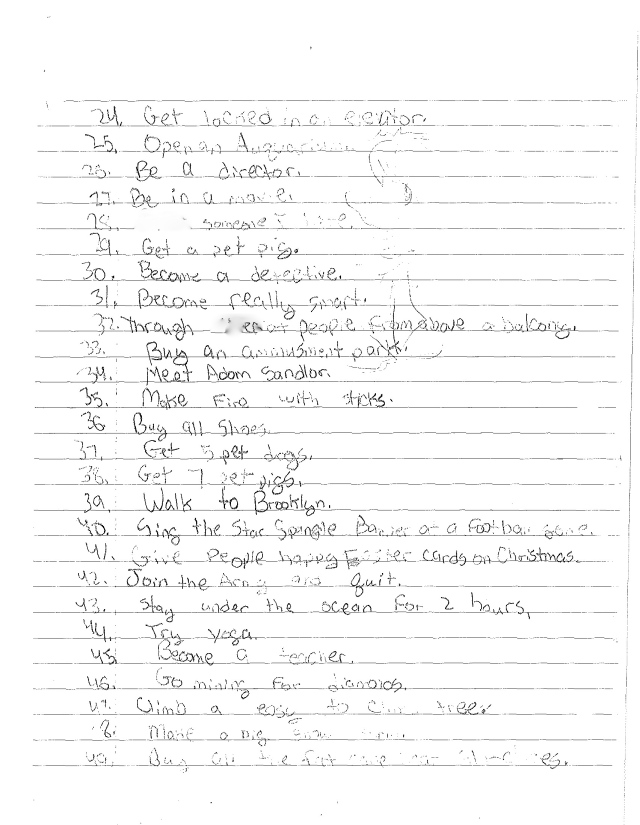 What do you guys think? Have you ever found old stuff that you wrote as a child? I’d love to hear about your experiences!